A Guide To Bitcoin Diamond

A Guide To Bitcoin Diamond

Bitcoin has been around for quite some time now. While the world has tried to adjust to it, there have been continuous developments to improve blockchain, the technology behind it. These improvements include the creation of many new cryptocurrencies using the original Bitcoin code, and most of them were created through a process known as a hard fork.

A hard fork involves splitting a network at a particular point and making changes to it. For example, developers may seek to change the speed or block sizes of the Bitcoin blockchain by forking it and creating a new cryptocurrencythat carries the new updates.

Although there are many different Bitcoin forks, Bitcoin Cash is easily the largest and most successful of them all. Some other past forks include Bitcoin Gold, Bitcoin Atom, Bitcoin Platinum, Super Bitcoin, and Bitcoin Diamond.

Since each new currency has its own protocol, miners can study them and begin mining that specific digital currency. When Bitcoin Diamond launched, miners created blocks using an improved version of the Proof-of-Work algorithm, known as the X13 mining algorithm. The X13 algorithm is optimized for faster transactions and other benefits that were created to make BCD a better alternative to Bitcoin.

Although Bitcoin is the largest and most popular cryptocurrency, factors such as speed, scalability, and efficiency make it difficult for the average person to use. As a result, there is continuous development within the Bitcoin community to create forks and products that analyze and solve these issues. This means that Bitcoin Diamond is not a competitor of the larger digital currency. Instead, it complements Bitcoin by solving some of its major issues such as block size and accessibility.

Nobody knows much about the developers of BCD except their names. However, it is clear that they identified several problems with the Bitcoin network and worked out a way to solve them. According to Team Evey and Team 007, the miners who created Bitcoin Diamond, there are several advantages which the currency was created to have over Bitcoin. These include costs, speed, and accessibility through the following key aspects:

While Bitcoin will only have 21 million units in existence, many cryptocurrencies have been created with higher supply. One example is Litecoin, which has a total supply of 84 million units. Another is Bitcoin Diamond. Since the price of Bitcoin is a lot higher than other currencies, creating 21 million tokens which are gradually released is meant to prevent inflation.

Bitcoin Diamond, on the other hand, is capped at 210 million. This large number of units will help to keep the price of the of Bitcoin Diamond low enough for those who want to use it for micropayments. It makes no sense to carry out complex divisions and break a currency as large (per unit value), as Bitcoin into smaller units for micropayments.

Bitcoin blocks have a standard size of 1MB. The need for a larger block size has been debated continuously, even with newer cryptocurrencies such as Litecoin and Bitcoin Cash. Bitcoin Diamond blocks were created with a capacity of 8MB, which allows miners to confirm more transactions in a single block. Not only does this lead to more efficiency and use of confirmation time (10 minutes), it also reduces overloading on the network.

Miners are tasked with securing the network and confirming all transactions to ensure that only valid ones make it to the blockchain. To do this on the Bitcoin network, they use specialized mining devices known as ASICs, which supply the amount of computational power it would require to add new data to the blockchain.

Unfortunately, ASICs and the amount of electricity needed to power them are expensive. As a result, miners often have to endure the inconvenience of moving to other countries with cheaper electricity and rent. Often, they join groups known as mining pools, as a way to share resources and rewards. Bitcoin Diamond eliminates this problem since its algorithm requires only a GPU device for all its computational needs.

Since BCD’s most attractive features are its relatively faster transaction speeds, lower fees, and higher value compared to a Satoshi, it may fix the issue of micropayments, since they occur frequently in small amounts such as recurring subscriptions.

Bitcoin cannot handle such payments for a number of reasons, including the transaction fees and the time it would take miners to confirm every micropayment transaction, given its block size of just 1MB. This and the platform’s scalability problem raise the question of whether Bitcoin can truly replace money and to what extent it is being hindered by these factors.

Bitcoin Diamond can be used by small and medium enterprises that need to make these frequent microtransactions for services like food or coffee sales. Currently, to pay for a cup of coffee on the Bitcoin network, a user would have to wait for 10 minutes and have only a limited number of those transactions in the same batch. This is certainly not ideal, especially for people who do not have the patience to wait for that.

BCD can also be used to carry out any transactions that a user would typically carry out using Bitcoin, except that it’s faster and cheaper. So, both BTC holders and non-holders can use Bitcoin Diamond.

For those who are non-holders of Bitcoin, BCD can be bought on 29 different cryptocurrency exchanges as displayed on their official website. Its price is relatively low as a result of a decline after its successful launch. 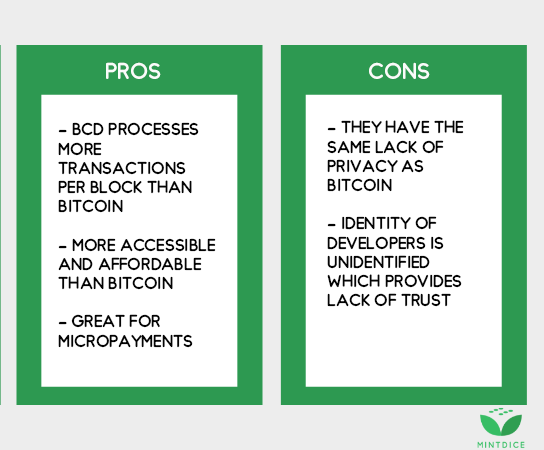 Bitcoin Diamond comes with the same promise as many other forks before it. The promise of the perfect block size, transaction speeds, cost, and accessibility has been thrown around the cryptocurrency industry since people first noticed the inconvenient aspects of Bitcoin, even amid the frenzy. But time in the industry has shown that the solution to one pressing issue often comes with a hundred problems of its own. Now, only time will tell whether Bitcoin Diamond will make a real difference in the way the world sees cryptocurrency.