The Application Of Blockchain In Food Industry

The Application Of Blockchain In Food Industry

Blockchain has been making headlines in many industries, including banking, gambling, real estate, energy, healthcare and even entertainment. The praises and misconceptions keep flying around about its ability to change every global industrial platform, yet many don’t know what it really is or have an idea of any real-world applications of this technology. Most assume cryptocurrency and blockchain are a package deal, but, especially in recent cases, this phenomenon has found application in other business realms.

So what on Earth is this new “revolutionary” technology anyway?

Simply put, a blockchain is a peer-based digital ledger or record storage system in which transactions can be immutably kept. This means that any information stored within this system can be referred to for record’s sake, but cannot be tampered with. Of course, there are different types of blockchains and this feature is debatable depending on the type being used, as the case of the DAO has proven in the past.

Save for the occasional exception, the technological concept behind a blockchain mostly trends towards the inability to tamper with data entered into it. As a result, such data can be authenticated and events can be verified easily.

Blockchains are also mostly decentralized, meaning that they have protocols that allow members of the network to handle security and verification in a fair way, cutting out the need for a central authority to oversee the process. This is why cryptocurrency transactions like those carried out on bitcoin can be trusted. The system proves that a user’s balance and transactions are accurate and true at every point in time.

Food is important for the health of many living beings. Where human beings are concerned, there is a strict standard for what healthy food is. People also have many different preferences, pertaining to food types and sources. For some, a particular fish must be sourced from an exact part of the world, and for others, food must pass a certain religious condition, such as Halal for Islamic beliefs, or Kosher for Jewish beliefs.

Other needs can be based on pathological conditions such as epilepsy or broad spectrum autism.

People have conditions for the source and state of food products that can often be difficult to prove. It’s easy to tell a person that their favorite fish was sourced in Peru; however, in the absence of proof, anyone can lie about sources to ensure sales.

Theoretically, by stamping events and data as soon as it is recorded, blockchain creates an airtight supply chain in which the history of a food item can be verified.

Remember the Peruvian fish? Imagine if a person could scan a barcode on a fish pack and see the exact day it was caught, along with a geotag to show its location?

Imagine this system would also show the third parties involved in packing and logistics, as well as every process endured up until the point of reaching the retailer. Wouldn’t this be more convenient for the average person who has no way of knowing about their food products otherwise? This is what is possible with blockchain today.

For food tracking applications of blockchain technology, entering data into the system does not prove that the data is true in the first place. Such systems will most likely be consortium blockchains managed by the food companies, so they are not immune to manipulation.

The main importance of this system is that it erases the need for a lengthy paper trail that stakeholders cannot access. It also lays the foundation for data collection in a system that can be combined with other technologies such as sensors and actuators, to perform more complex agricultural tasks. 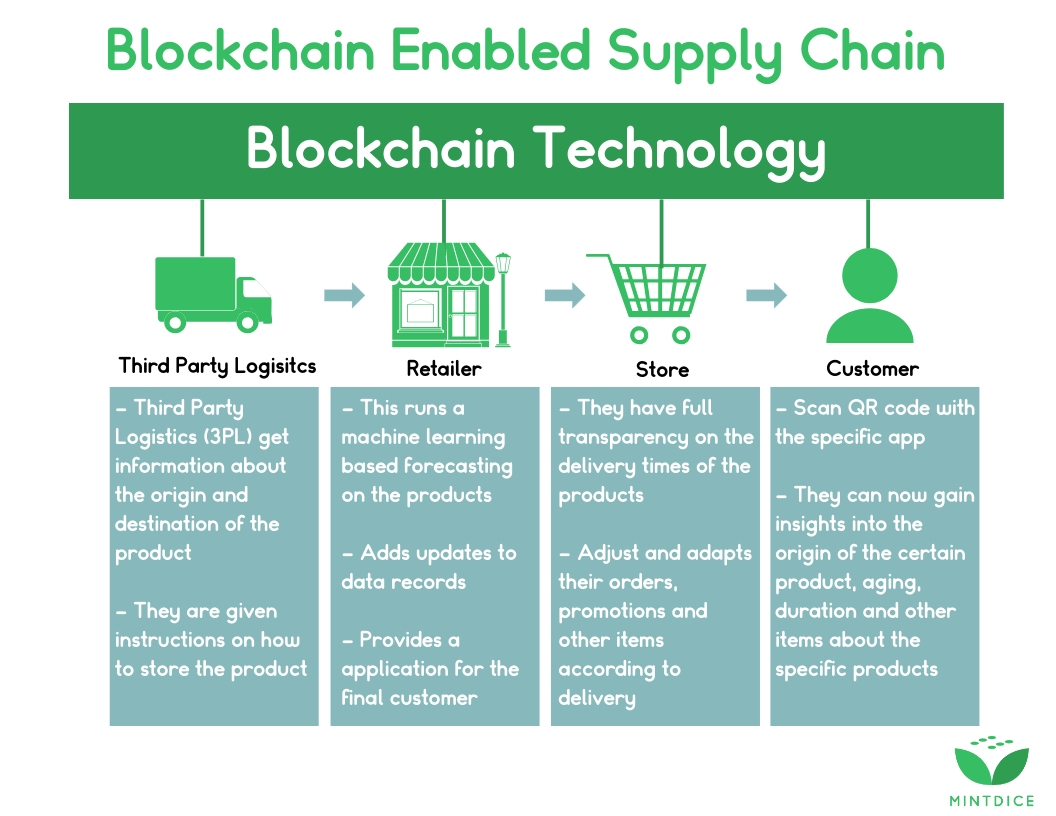 When there is no chain management system in place to trace the source of something as essential as food, bad things can happen. This is particularly bad for the United States, seeing as one-sixth of the population is affected by food poisoning annually.

In fact, according to the Centers for Disease Control and Prevention (CDC), this results in more than 125,000 hospitalizations and 3,000 deaths every year.

This is a familiar story for Dole, a business that had to recall its spinach from 26 states, following a public outbreak of E.coli in 2006. This outbreak resulted in the death of three people, kidney failure in 31 people and symptoms like dehydration, nausea, and diarrhea in 205 people.

According to investigations, the outbreak may have come from the farm; however, without an airtight system in place, it was difficult to say for sure, therefore making it hard to find a solution.

There have been other cases, such as that of Foster Farms, a California-based chicken producer. In 2013, 634 members of the public were infected with Salmonella in 29 U.S states and Puerto Rico, leading to a recall on its products.

In 2018, another outbreak occurred, which spelled bad news for many people across the country who had gotten a bad batch of Romaine lettuce from Walmart. Like any other grocer would, the commerce giant cleared every speck of Romaine lettuce off its shelves until authorities could determine the cause.

Unlike other companies, Walmart did not stop there. Instead, it is investing in a potential solution — a blockchain system to track food and detect which products may be contaminated. The technology is being developed by I.B.M and will require its suppliers to input real-time data on every product supplied in every transaction.

When foodborne illness outbreaks occur, the authorities are faced with the task of combing through long paper trails to find the point of contamination. A blockchain supply chain can make this task easier, by showing where each product originated.

While this can be achieved by using a regular database, blockchains offer a high level of security that may be more difficult to bypass. Such data stored in one place can be useful not just for tracking the origin of infected food, but for tracing the buyers and ensuring that there are no further outbreaks.

CONVENIENCE FOR SHOPPERS AND RETAILERS

The application of blockchain technology in the food industry will give buyers a better idea of the processes involved in the creation and distribution of their food products.

Logistics could become less complicated because retailers would be able to check delivery truck availability in seconds within the same system while viewing the actions and transactions of other collaborators. The information would flow freely through such a system, creating much-needed transparency within otherwise private affairs.

What better way to collect food data than through a secure system used by large corporations in the industry? Food tracking from the source to the final consumer can provide insights into how distribution can be optimized. From studying old food processes, better ones can be created.

Walmart’s application of blockchain technology is a giant step forward for the food industry. Finding a secure way to optimize the food supply chain network benefits every stakeholder involved. For example, if anything happens to a product along the line of production and distribution, Walmart can easily know who should be held accountable in every transaction.

Blockchain users have first-hand, decentralized access to real-time data that can be sold or distributed for free and have the opportunity to monetize their blockchain by allowing other companies to use it. Soon, blockchains have the potential to be a common presence in the food industry, and may eventually prove its value in other real-world applications. Albertsons has already made a play for a similar system, so who’s next in this blockchain revolution?