What Online Marketplace Can Crypto Improve?

What Online Marketplace Can Crypto Improve?

The introduction of Bitcoin in 2008 by Satoshi Nakamoto marked the beginning of a trend in decentralization. Today many financial applications embrace bitcoin, and many see the cryptocurrency as an investment.

To others, it is a platform to make payments and transfer money from one place to another securely, with low charges, and without regulation or an authority figure controlling the transaction. Bitcoin itself is an exciting innovation, but the real credit should go to blockchain, its decentralized supporting technology.

Decentralized systems are distributed networks that cannot be controlled by a single central authority. In the case of marketplaces, decentralization can ensure that these spaces are less restrictive in terms of geographical and regulatory barriers. Decentralizing an industry or marketplace would mean that participants within those spaces could take part without regulation by authorities.

Blockchain technology is much more than just a digital exchange platform. It promotes distribution within a secure system and acts as a foundation for improved versions of these marketplaces. None of the benefits of Bitcoin – security, lack of geographical restrictions, decentralization, transparency, immutability, and privacy in transactions – would be possible without it.

As corporations realize that this technology can power more than Bitcoin and could potentially optimize operations in several industries, some of the focus has shifted from Bitcoin and currency exchange to how blockchain could be applied in the real world. As a result, it is fast becoming integrated in several industries and marketplaces — and may be creating a more decentralized world. 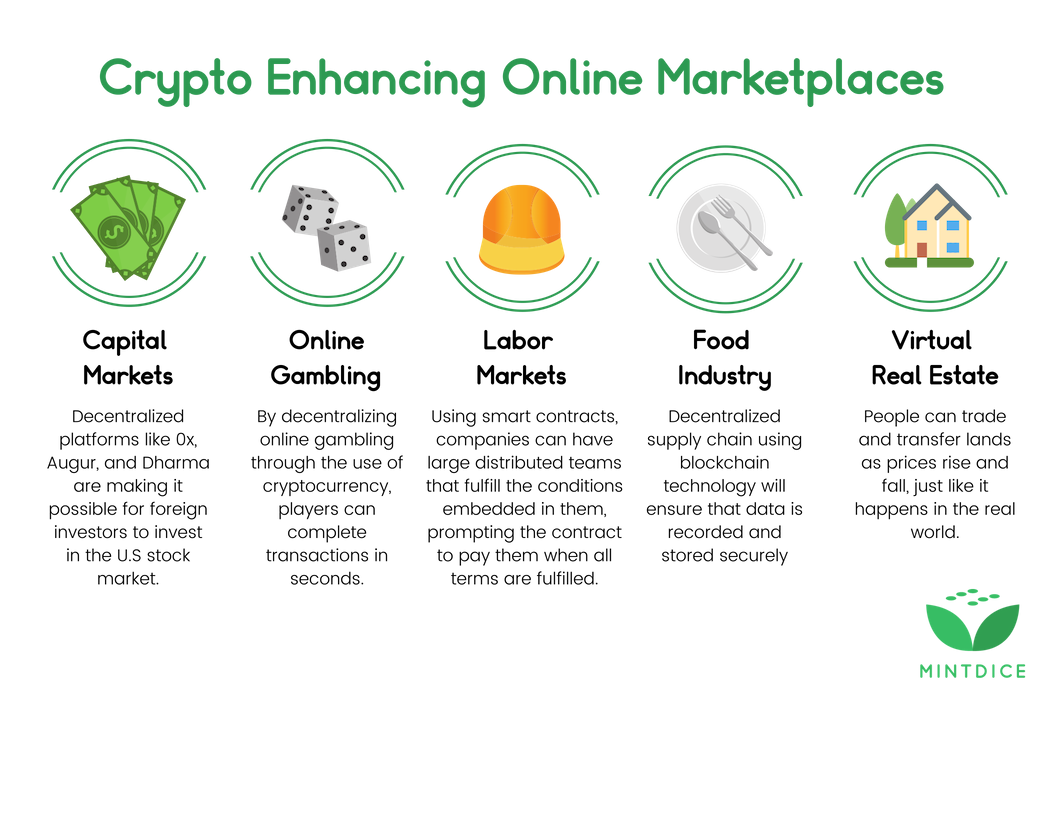 Every day, financial investors pour their capital into various enterprises to foster economic growth and innovation. It has allowed individuals and governments to become wealthy enough to develop their societies, as well as fund new ideas and fields. According to NASDAQ, the U.S stock market is the largest in the world with an estimated worth of $34 trillion, accounting for 43% of the global capital market. But what if it could be larger?

Currently, people in other countries find it difficult to invest in U.S stock due to bank issues, KYC protocols and location barriers. Decentralized platforms like 0x, Augur, and Dharma are making it possible for foreign investors to invest in the U.S stock market. This will benefit both the investors and the economy long term, outside of the cryptocurrency market.

Online gambling is currently one of the fastest growing industries with an approximate worth of $46 billion in 2017, estimated to rise to $95 billion by 2024. For all its growth potential, it is riddled with inefficiencies in several areas. One such area is payment. Paying gamblers in most fiat currencies comes with regulatory restrictions, taxes, and heavy bank charges caused by third-party payment processors.

By decentralizing online gambling through the use of cryptocurrency, players can complete transactions in seconds. Because there are no geographical restrictions on cryptocurrencies, online gamblers can play from almost any country. Several cryptocurrency gambling sites, such as MintDice, offer players a full range of the benefits that decentralization has to offer.

Regulatory restrictions in the labor market often deny several corporations access to specialized talent. A lack of trust is another major issue for both employers and remote employees in other countries. Even traditional contracts are not sufficient to create trust between both parties. Using smart contracts, companies can have large distributed teams that fulfill the conditions embedded in them, prompting the contract to pay upon completion.

As an example, a company may decide to hire a fully remote marketing team distributed across different continents around the world. There is a chance that the employer could refuse to pay after the team members have rendered their services or that the marketing team doesn’t reach its goals after already receiving payments.

In this case, a normal contract would not suffice since team members and the hiring company are in different countries. A smart contract could be set up with instructions to pay out a certain amount agreed upon when the team meets a certain goal.

With remote workers filling up spaces in many U.S companies, decentralization may be the key to ensuring that everyone gets what they want. For example, the Swiss startup Aragon is building a decentralized organization powered by this system.

Walmart and other corporations are looking into decentralized solutions for supply chain management in the food industry. This solution will serve three major purposes:

Anyone who’s seen the movie Ready Player One already has an idea of how exciting virtual reality can get. For context, the movie is based on a world in which most people live in a virtual game half the time, developing it, trading and earning rewards.

Today projects like Decentraland are making it possible for people to own virtual real estate. In virtual spaces, landowners are allowed to develop their land and create a distributed virtual world made up of games and other projects.

People can trade and transfer lands as prices rise and fall, just like it happens in the real world. The major difference is that those trades would be based on cryptocurrency. Although the landowners can’t physically build on their virtual plots, the digital assets built on them have monetary value and can be transferred.

In 2016, the popular app Pokemon GO became a hot trend, allowing people to pick up virtual Pokemon which had game value. The game was downloaded 800 million times, proving that people are willing to engage with the virtual space if incentivized, especially by money. Decentralization provides that incentive in the form of freedom and rewards. Since there is no central authority in charge of virtual spaces, the users can make it whatever they want.

Centralization has been the most common model for running companies and regulating marketplaces for a long time. In truth, many systems perform well under this model and have no need for decentralization. This doesn’t negate the observation that there are many fields and marketplaces that do.

As the world strives for interconnectedness to drive global operations, there will be a shift towards distribution in every system. Open finance, remote work, distributed computing, online gambling, and real-time supply chains are solid examples.

Each of these systems needs to be operated in a permissionless way that doesn’t rely on a central party to work efficiently. Blockchain technology could provide these systems with the proper foundation on which to build distributed structures.

For now, it is impossible to forecast what stacks can be built on these use cases or how they eventually contribute to globalization. However, one thing is clear: as blockchain development progresses, we’ll discover even greater use cases.