HomeBlogSecurity Tokens VS Utility Tokens: What Are The Differences?

Security Tokens VS Utility Tokens: What Are The Differences?

Security Tokens VS Utility Tokens: What Are The Differences?

Blockchains are proving to be incredibly useful, and are estimated to reach a market size of more than $7 billion by 2024 according to Grandview Research. They are also set to drive many operations that were seen as inefficient in the past. Although cryptocurrency and blockchain seem to go hand-in-hand as this technology is mostly associated with financial assets, it is also used for many different applications as well – authentication, supply chain management, content distribution, and enterprise services.

Simply put, a blockchain is a peer-peer digital ledger of transactions. Sounds like the average database, right? But here’s where things get interesting. Unlike common databases, public blockchain systems are more secure and difficult to manipulate because they are not controlled by a central authority – many speculate that the idea of a decentralized blockchain might be the future of data management.

For most blockchain projects, there are complex cryptographic functions and regulations used to ensure that transactions can be entered and verified securely by its users. Projects like Bitcoin and Ethereum have thousands to millions of users, which add to the complexity of the system. On its own, a blockchain sounds pretty impressive. However, such systems can’t achieve much without the token that powers them.

This virtual token is a unit of exchange that powers all transactions carried out by users on a blockchain network. For example, most operations on the Monero blockchain platform are carried out using XMR, its main token. Users can accumulate tokens, which have value and many attributes of money. As buying and selling trends alternate, so does the price of a network’s token.

There are many ways to obtain tokens, with one of the most popular methods being initial coin offerings (ICOs). Another popular way in which tokens are issued is by airdropping them, a method by which they are given out for free to create awareness for that token.

An initial coin offering is a process in which a blockchain or cryptocurrency company offers their tokens to the public. The tokens serve as stakes in the company, and in exchange, the company raises capital to complete the development of its project. They are similar to IPOs and can be conducted through a third-party ICO solutions company. Tokens obtained through an ICO can be sold and transferred to another user eventually.

Tokens are generally classified as either utilities or securities and add value to the industry in their different ways.

Utility tokens are not intended as a means to invest in a project. They usually underpin app projects, games and blockchain companies in general. By owning utility tokens, a user is entitled to future project access.

As an example, a user may buy tokens in a game company that has not developed its game yet, or any other type of company offering a service that isn’t fully developed yet. Utility tokens act as coupons which will allow such users to play the game in question or access other types of services depending on what they buy.

Unlike a utility token, a security token is created for the sole purpose of blockchain investment. It is usually tied to a publicly traded real-world asset like company stock like in the case of Overstock, gold, or other precious commodities.

Security token sales are regulated by the Securities Exchange Commission (SEC) and are held to the same standard as securities. They come in handy when offering company stock because the chances of growth are greater than if they are traditionally traded. Some examples of security tokens are 22X Fund, Blockchain Capital (BCap), Siafunds, and Slice.

One of the main differences between both types of tokens can be found in the way they function. Since security tokens were created to represent and even mimic some of the actions and behaviors of real-world securities, their sole purpose is for investment.

People who hold such tokens can earn dividends whenever the issuer earns a profit, just like they would if they bought stock in a company. Many praise tokens for the convenience they offer with regards to fractional ownership – assets can be easily transferred or created through security tokens, appealing strongly to the savvy digital investor.

Utility tokens do not offer any such benefits, but they are also cryptocurrencies which have a tendency to fluctuate in price. If the price of a utility token increases, then its holders can earn profits by selling or transferring it to another user.

Although ICOs, in general, require regulation, the law is stricter for security tokens. Depending on market movement, the value of both security and utility tokens can increase at any time, earning profits for their holders in the process. Because almost every token has that quality, it can be difficult to differentiate one type from the other. The Howey test was created by the SEC to help with this issue. 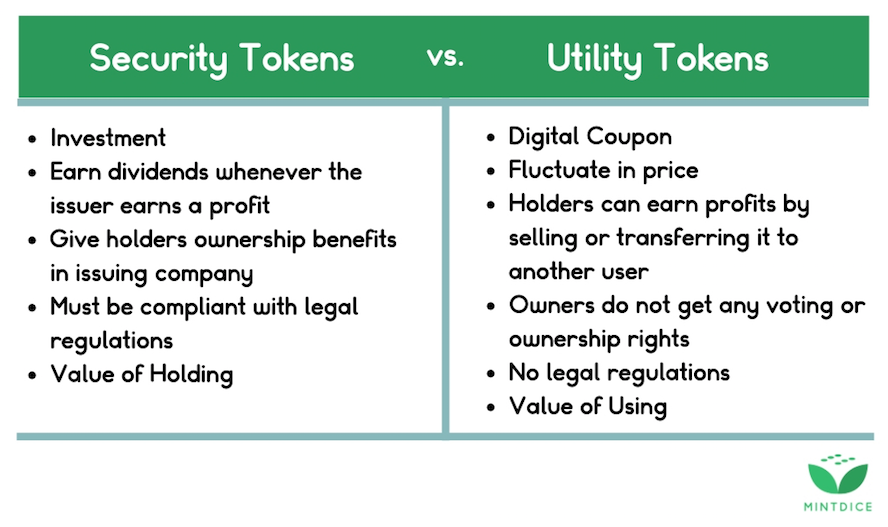 In 1946, the Supreme Court handled the SEC vs Howey case, which laid the groundwork for testing whether an arrangement involves an investment contract. At the time, the two defendants being sued by the SEC were selling land rich with citrus groves and leasing it back from the buyers to profit from the citrus.

According to the court’s ruling, the defendants had failed to register the leaseback as a security. The test has now been applied to cryptocurrencies which follow the same principle.

Apart from these tests, many states are coming up with their own sets of conditions to test which cryptocurrencies can be classed as security tokens.

Digital tokens share many broad characteristics, such as volatility and blockchain support. They also have a tendency to earn profits for their holders. As a result, some people probably don’t know that they are classed differently, or what their differences are. In general, they are all seen as vehicles for investment or trade, and their fundamental differences lie in the access they give to a user.

Utility tokens can be likened to an all-access pass that lets a user interact with a project whenever it is fully developed. Security tokens, on the other hand, mirror securities and serve the purpose of dividend-earning investments. Deciding which one is better is simply a matter of preference and depends entirely on the platform. For example, a gamer or developer may prefer a utility token as opposed to a long-term security token.